SPOTEMGOTTEM DEAD: Spot Gottem, the 19-year-old rapper, was shot at during a drive-by while leaving a recording studio in Miami

Originally from Jacksonville, Florida, and just 19 years old, Nehemiah Lamar Harden, better known under the pseudonym of SpotemGottem, was shot in Miami this Friday, September 17, after a car accident. Early in the morning of this Friday, shortly after 3 a.m., he was leaving a recording studio when he was allegedly shot at least five times. He was in his car, a white Dodge Charger, on the I95 highway when the assailants allegedly fired 22 automatic pistols at his vehicle from the driver’s side, says the media TMZ (who was able to speak to Dee Phatboy, the manager of the rapper). Taken to the Aventura hospital in critical condition, he was mainly hit in the two legs. His state of health is now stable, as is the driver of the vehicle, who was injured in the hip. If . did not know the reasons for this incident, the police would be looking for the perpetrators of this shooting. They would have asked witnesses to come forward to provide elements that would advance the investigation.

The rapper is involved in other cases

Mainly known across the Atlantic for the success in 2020 of his single Beat Box, which reached 12th place on the Billboard Hot 100, SpotemGottem has already faced justice. This summer, he was arrested in July in a hotel room in the city of Aventura (Florida) while armed with an AK-47. As a result, he was charged with aggravated assault with a firearm, possessing a firearm by a convicted felon, and intended to commit a felony. He had paid his bond of 18,500 dollars to remain free. This arrest would be linked to another incident dating from June when he had pointed a gun at the manager of a parking lot in South Beach in Miami while he had to pay an 80-dollar ticket.

Also, in August, SpotemGottem was questioned by Dallas police in an investigation into the death of Reginald Agnew Jr., which occurred at a club party on September 30, 2020. Authorities then believed they had connected the words of the Mc in his track titled Again and Murder.

In June 2017, the 15-year-old rapper was arrested in Duval County (still in Florida) along with his friend Chaddrick Daniels (also 15 at the time). The two teenagers were suspected of a robbery and arrested in a car while they had concealed a weapon there. They were then prosecuted for these two reasons. 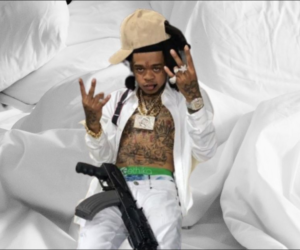 Finally, to conclude on a more musical note, in May 2021, SpotemGottem released his mix-tape, Most Wanted. An opus of 12 tracks on which we found DaBaby on the track Beat Box 3.

Also you can read more articles about SPOTEMGOTTEM DEAD.